Air-operated double diaphragm pump is a very common type of diaphragm pump. As its name suggest, the pump operation is carried out using compressed air, rather than electricity. The air operated double diaphragm pump is made up of the two liquid chambers and two membranes/diaphragms. Each of the chambers has a discharged and suction check valve. Basically, the pump uses the two diaphragms to pump liquids in and out of the pump’s body. The flow of air flow of air between the chambers is controlled through and inbuilt air spool control device. The flow of air from one membrane to another causes one chamber to expel fluid through the discharge and also facilitates the suction of fluid in the other chamber. Due to their unique operation characteristics, air operated double diaphragm pumps are suitable for applications where the use of electricity would be disastrous e.g., pumping of flammable liquids. 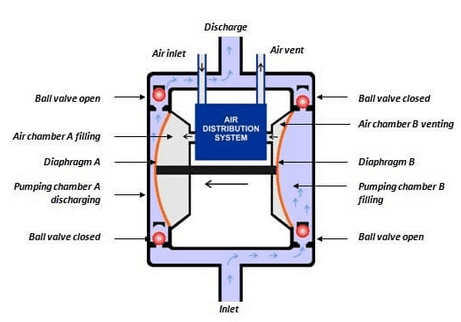 The air operated double diaphragm pump uses specially designed check valves to control the flow of fluid in and out of the central chamber during pump operation. The function of the check valve is to ensure the fluid flows in one direction only.

The compressed air distribution system directs air to the back of diaphragm A pushing it away from the center section. The diaphragm A then causes a press stroke on the liquid chamber expelling the liquid out of the chamber A. At the same time, the compressed air behind the chamber B is pushed out into the atmosphere and a vacuum is created. The inlet ball valve in chamber B is forced out of its seat allowing the chamber to be filled with liquid. Once the pressurized diaphragm A has reached the end of its stroke, the air in the chamber is vented out by the air distribution system and compressed air is directed behind the diaphragm B. The compressed air pushes diaphragm B away from the center of the pump body resulting in the shaft pulling the diaphragm A towards the center of the pump body. Simultaneously, the volume of chamber B decrease, the discharge ball valve is pushed off its seats, and the fluid is pumped into the discharge port. Upon completion of the stroke the air valve leads the air again to the back of diaphragm A and restarts the cycle.

This may occur due to constant venting which can cause ice to build up around the air vent or within the air distribution system. This challenge can be solved by installing a heater or maintaining the pressure of compressed air at the level recommended in the pump manufacture’s guide

This is caused by the cycling action of the diaphragm which cause the fluid to accelerate during compression cycle and to slow down during the suction cycle, creating pulses in the discharge. To solve this problem, a dampener must be installed on the top of the pump to decrease the pulses.

Noise in AODD pump is caused by the constant venting of the air valves and vibrations resulting from the cyclic action of the diaphragm and. The level of noised can be reduced by installing the air vent line with a muffler.

Air operated double diaphragm pump cycles but does not prime

An air-operated double diaphragm pump is characterized by a cyclic operation, gentle spinning and self-priming ability. The air operated double diaphragm pumps are widely used to transfer viscous, corrosive and abrasive liquid in different industries such mining, oil and gas, food and beverage, and waste water treatment plants, and pharmaceuticals industries. As the AODD pumps run on compressed air, they are suitable for applications where the use of electricity would be disastrous e.g., pumping of flammable liquids, highly volatile liquids and hazardous environment.

Air operated double diaphragm pumps offer a myriad of benefits including the ability to run dry without damage, they are self-priming, simple construction, ease of installation and minimal maintenance requirements. These pumps are also available in different designs to suit the needs of different applications. However, these pumps also have a few operational limitations including icing in the pump muffler, pulsating discharge, noisy operation, and their efficiency is dependent on the air quality. Some of the common troubleshooting issues for an air operated pump include unbalanced cycling, premature diaphragm failure, pump cycling but not priming, bad flow and press and many more.

Send us a message if you have any questions or request a quote. Our experts will give you a reply within 24 hours and help you select the right pump you want.